Life is a series of well-mets and fare-thee-wells, and its pivotal moments are seldom heralded by blaring trumpet overtures. Certainly this is true for Jack Beck, one of that class of musician who works diligently doing what comes naturally, and never tries to be other than what he is. With 9 recordings and an honorary lifetime membership in the TMSA to his credit, these unassuming ways have led to excellence. In addition to a lengthy solo career, Jack’s easy-going personality and musical skill have earned him work with exceptional musicians from Scotland and beyond. 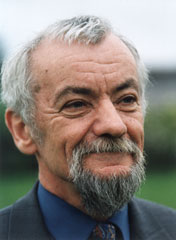 In the late 1950s, Jack bought a second-hand guitar “because everybody else was”. As the Skiffle craze swept Britain with its jazzy blues feel, Jack put steel strings on his classical guitar, learned the required three chords, and set himself in motion. “I had a lot to learn,” he says of this period. His opportunity was coming. When Dunfermline’s folksong club ‘The Howff’ began in 1961, and traditional singers like Jeannie Robertson, Jimmy McBeath and Willie Scott appeared alongside young skiffle-ites, Jack was there, soaking it all in. As things progressed, this was to prove a great boon not only to himself, but to many of Scotland’s folk musicians.

Enjoying these singers led to Jack’s previously Irish and American repertoire ebbing into Scots ballads and songs. (He also re-strung his guitar with nylon.) Enter the first prodigious ‘well-met’: in 1963 a teen-aged Barbara Dickson sang her first Howff floor spot, followed by Jack singing his regular one. Before the evening was over, they had cemented a musical partnership. Heeding advice from Howff guest Cyril Tawney to “learn more Scottish songs,” they were in the right place at the right time. Scotland’s interest in its own song traditions was flourishing in the 1960s. Blairgowrie’s inaugural festival began. Soon after the pair spent three weeks camped on Arthur Argo’s floor while they sang nightly at The Music Hall in Aberdeen’s summer music festival. They sang Scots songs.

Jack followed in his father’s footsteps as a painter and decorator when Barbara changed career directions. As he worked to establish a successful business, another fortuitous meeting took place. Jack was asked to “bring the guitar” to a party, met fiddler Davy Lockhart, and thus re-entered Dunfermline’s folk club scene. There he met Lindsay Porteous and Jimmy Dunn, part of the ‘Causeway Folk’ group that ran the club. When it folded in 1976 the survivors began an informal weekly session that gradually evolved into the multi-instrument folk group ‘Heritage’. During the 15 years Heritage existed it became known for its striking combination of instruments and singing combined with a deep love for Scots tradition. As the band played festivals in Italy, France, Switzerland and other places, they imbibed European music from international friends.

Invited to tour the United States in 1989, Jack and long-time friend and fellow Heritage member George Haig went on the first of many such pilgrimages. This led to work with ballad scholar Dr. Tom Burton and the Scots-Appalachian Studies Programme; Jack was soon asked to rebroadcast his monthly radio interviews with Scottish musicians, in Tennessee. It was also on a Tennessee tour that he played a festival where an American storyteller was appearing, and the two fell to talking. The teller, headed for Newfoundland to begin a Folklore Ph.D., interested Jack-in how to further interpret the stories within Muckle Sangs.

In 1996, John Watt and Jack were appearing separately at the Auchtermuchty Festival; John tracked Jack down to explain he required a guitarist. When Jack agreed, John said, “Good. We’re on in half an hour.” Since that inauspicious beginning the combination of John’s singular originals and Jack’s masterful traditionals has been heard across the land. Jack teamed up yet again for ‘Muchty Festival’s most famous performance of 1998-a wedding to the storyteller he met in Appalachia. Since then, he and Wendy Welch have taken their story and song performances to various venues in the United Kingdom, Canada, and the United States.

Jack continues to tour with other musicians as well; Sara Grey and Anne Neilson worked with Jack to present a programme of Old World/New World ballads for the ‘Celtic Connections’ festival in Glasgow, and on a three-week tour of America, bringing the old songs to new listeners. Jack continues to work diligently in his new home in the East Neuk of Fife, being what he is: an excellent musician who lets the songs speak for themselves.