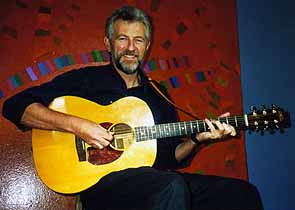 Chris Foster is a master of his trade. Alongside Nic Jones, Dick Gaughan and June Tabor, he established himself in the 1970’s as one finest interpreters of the traditional ballads of the British Isles. Chris has a distinctive voice, deep and clear with a faint overlay of his native Somerset, and a vocal style that incorporates a subtle use of decoration with an intricate and exciting sense of rhythmic patterns. Underpinning it all is his on-stage persona, with his urbane wit and engaging enthusiasm for his music that draws the audience into his performance.

Chris grew up in Somerset, where he first heard and started singing traditional songs. Following a visual arts training he became a full-time musician, clocking up 8 years of continuous touring throughout Britain, Europe and North America. Along the way, he picked up musical influences and songs from traditional musicians in the coastal villages of East Anglia, intriguing and unusual songs from the manuscripts of the Victorian / Edwardian folk song collectors of his native West of England and awards and critical acclamation for his recorded work in 1977 and 1979.

Then in the 1980’s he changed focus, dropping out of the folk scene and settling in Salisbury where he co-founded Mobile Arts, a mixed media community arts company. Using music, drama, visual arts, oral history and print, Mobile Arts established a reputation for exciting, original work, much of which researched, revived and re-interpreted the musical traditions and customs of the area.

In the 1990’s Chris moved to the midlands and cast it all back into the melting pot, re-emerging onto the folk scene with innovative visual and musical contemporary interpretations of English songs and traditions in two shows ‘Sting in the Tale’ and ‘Traveller’s Tales’. He has also been increasingly in demand as an accompanist on other peoples’ recordings. His solo CD ‘Traces’, tells compelling stories which in his own words, “reveal traces of other lives, struggles and times which I can only imperfectly imagine, but which still resonate powerfully today.”